Police have launched a hate crime investigation after a suspect allegedly sprayed antisemitic graffiti near a sculpture outside of the Art Gallery of Ontario earlier this week.

It happened at the northeast corner of the gallery near Dundas and McCaul streets on Wednesday night.

Police say that a man was observed using white spray-paint near the bronze “Couch Monster” sculpture, which depicts an elephant pieced together using sofas, armchairs and other furniture.

The Hate Crime Unit was subsequently consulted and the incident is now being treated as a suspected hate-motivated offence, according to police.

An image of the suspect has also been released.

He is described as being in his 50s with a medium build, brown and grey shoulder-length hair with a balding spot on the top of his head and grey and white cropped facial stubble. He was last seen wearing a black T-shirt with a “Tobacconist” logo on the front, a black sleeveless hoodie with faded black and grey jeans, black Adidas sneakers with blue soles and a black-banded wristwatch on each wrist. He was also carrying a black drawstring bag.

It is just the latest incident involving antisemitic graffiti in Toronto.

Those incidents are believed to have happened in the Yonge Street and Empress Avenue area in the early hours of June 9. 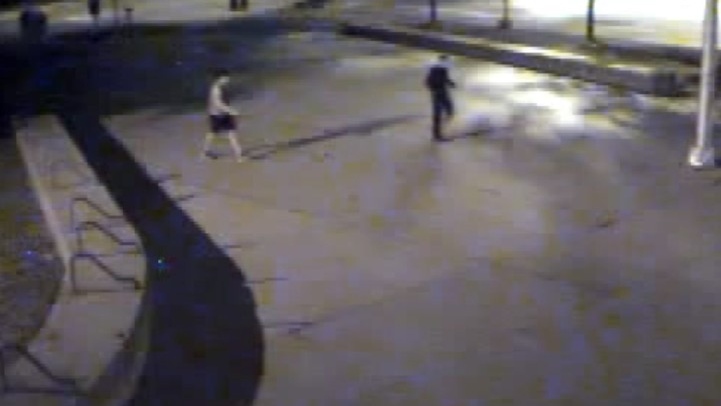 Two suspects wanted in connection with an alleged incident of hate-motivated graffiti in Toronto are seen in this surveillance image. (Toronto Police Service)

The first suspect is described as 16 to 20 years old with a slim build. He was last seen wearing all black clothing and a blue face mask.

The second suspect is described as16 to 20 years old with a medium build. He was last seen wearing a dark coloured hat, a grey long sleeved shirt and jacket with reflective stripes down the arms, black shorts, black shoes with white soles, and a blue mask.

Police are currently investigating the North York incident as mischief but the Hate Crime Unit has been made aware and will be supporting the investigation as needed.

What Visual and Street Artists Need to Know about NFTs and